At Helsinki Airport, as at many other airports the automatic border control system was introduced to help ease congestion of passenger processing during peak hours and travellers are swiping their passports themselves at border crossing checkpoints.

This year Helsinki Airport expects more than a million users to pass through its automated system, after it was reported that last year 600,000 passengers walked through at ease. Seppo Parkkinen the Kuopio-based musician travels internationally a dozen times a year spoke about the automatic passport control and said “It is much faster, you don’t have to wait and it works really well.”

Citizens holding biometric passports, of the European Economic Area, Switzerland and Japan can pass through the self-service passport control. Users scan their passport in a reader and later pose for a camera that uses facial recognition technology that compares their features with the digital photo embedded in the passport. 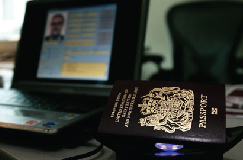 Departure control systems incorporating biometric passport information are becoming ever more affordable and within the reach of most airports. ARINC’s AviNet Airport system is specifically geared towards integration with existing systems and efficient passenger processing.

Currently 70% of Finns have a biometric passport according to Pentti Alapelto of the Finnish Border Guard. By the end of 2016 it is expected that that figure will be 100%. Alapelto explained “We also use the devices to help weed out passengers in cases where we believe someone is travelling with a false document,” as the high-tech readers also offer an additional layer of security to traditional passport control.