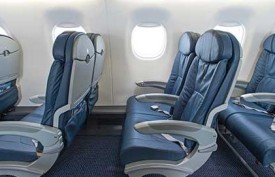 The US Department of Transportation’s first level approval of IATA’s plan to update airline messaging standards could mean that it will become easier for airlines to sell ancillary products and services to passengers at the time of booking. IATA’s Resolution 787 is concerned with what they are terming ‘the New Distribution Capability’ (NDC), governed by XML messaging, which will allow airlines to share their merchandise, ‘extras’ and upgrades with agents and other third-party distributors.

The long-awaited XML standard will be welcomed industry-wide for the distribution of the many varied products and services offered by different airlines. Currently, carriers are using a variety of methods to market services such as checked baggage, seats with greater legroom, Wifi and express boarding, for example.

The standard initially received opposition, particularly in the area of data sharing and consumer privacy. IATA addressed many of these concerns at their Annual Meeting last June and filed mutually-agreed conditions to the standards after subsequent discussions with the opposers, who included the Open Allies for Airfare Transparency.

It has also been generally and conditionally agreed that buying and other personal information would only be shared upon permission of the traveller.