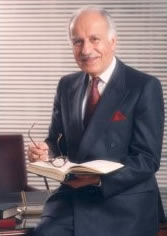 The passing of former president of the ICAO, Dr Assad Kotaite on 27th February has prompted a wave of tributes from the business aviation community as they mark the occasion with the respect that the 89-year old veteran of the industry richly earned in his career.

Dr Kotaite held the position of ICAO secretary general for six years before being elected president in August 1976, where he remained until his retirement thirty years later. His 53-year long career with the ICAO earned him the title president emeritus and was last year awarded the 40th Edward Warner Award in honorary recognition of his contributions to international civil aviation.

The business aviation community paid tribute this week with Ray Rohr, IBAC director of regulatory affairs noting Dr Kotaite’s support of the modernisation of ICAO standards and said, “The original standards had received limited amendment since their implementation in 1969, and didn’t sufficiently address modern business aircraft operations. As a demonstration of his confidence in IBAC and the industry, Kotaite suggested to [then-IBAC Director General] Don Spruston that the industry take the lead to establish a committee and draft revisions for ICAO consideration. We assumed that ICAO would substantially rework our first draft through committee, but instead that draft was largely accepted and implementation was expedited.”

Former NBAA director of international operations, Bill Stine, commended Dr Kotaite’s work to ensure recognition of the International Business Aviation Council (IBAC) and said, “IBAC petitioned for official ICAO recognition less than a year after its founding in 1981. From the beginning, Kotaite recommended that IBAC participate in council panels and committees to demonstrate our commitment to serving civil aviation.”

Dr Kotaite will continue to influence the future of civil aviation, living on through the ICAO’s Assad Kotaite Graduate and Postdoctoral Fellowship fund, encouraging continuing education for the advancement of safety in developing countries.