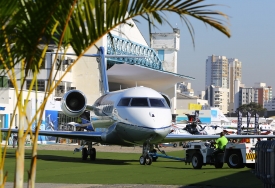 According to recent data, the region encompassing Latin America and the Caribbean is home to 2457 jet aircraft and 2588 turboprops, which represents almost 15% of the world’s fixed wing business turbine fleet. Mexico, with 851 and Brazil, with 824 business jets have the second and third-largest business jet fleets after the U.S. who carry a fleet of almost 12,000 altogether.

“The LAC business jet fleet growth and LAC GDP growth have been essentially expanding in tandem over the last 10 years, averaging about a 3.9-percent compound annual growth rate (CAGR)–faster than North America,” said Rolland Vincent Associates president Rolland Vincent. “The 50/50 balance between business jets and turboprops in the LAC fleet is in contrast to the worldwide jet/turboprop mix outside the region, which favors business jets by 1.5:1.”

According to Vincent, the LAC region has the highest concentration of business jets – 4.52 per 1000 High Net Worth Individuals (HNWIs), amounting to more than three times the world average of 1.44 and ahead of the U.S. at 2.87, making the LAC region ripe for business growth and an ‘attractive’ step-up market for the larger corporate jet manufacturer.

This is because, he said, that the average business jet fleet age is approximately 19 years old and 54% of the fleet is in the light jet aircraft segment. The growing number of HNWI’s in the region shows positivity in terms of the potential sales over the next 5 years as the world average age of corporate aircraft is around 16 years old.

Brazil’s business aircraft fleet expansion has been helped by the rising prominence of ‘homegrown’ Embraer, Vincent said. “The fastest-growing OEM, Embraer has established a particularly strong base and loyal following amongst LAC aircraft owners and operators, growing its fleet by 16.5-percent CAGR worldwide since 2008, and capturing more than 7-percent share of the LAC business jet fleet as of mid‐2014.”