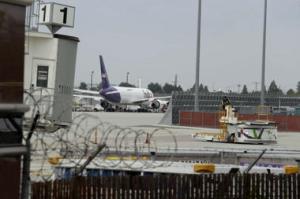 As the aviation industry reels in shock as a teenage stowaway breaches airport perimeter fencing to board an aircraft bound for Maui, even more serious questions are raised about airport security. Video surveillance footage clearly shows the boy make his way across the tarmac and climb into the wheel well of the plane, yet it was missed.

Since 9/11, airport security has been stepped up, or so we thought. There are increasing numbers of airport breaches being reported, articles claiming that passport checks are not being accurately carried out and monitoring equipment not being monitored.

Holes in security are most certainly there. Although security cameras are installed, they must be manned consistently to be effective. Airport perimeter fencing is more effective at keeping animals from the runway than people, it is said.

Officials are concerned and according to the New York Times, portions of the fencing at the airport are falling down in places.