Some of the industry’s biggest business jet manufacturers looked to take advantage of the interest by taking part in the second annual Abu Dhabi Air Expo, which took place last week in the capital. The three-day event is the only general aviation exhibition in the region.

“I think it’s fair to say business aviation is well established in the Middle East, but there is a notable shift now,” said Philip Nasskau, a spokesman for Bombardier.

Orders have been rising in the region, according to manufacturers, and the industry is projected to keep growing. Bombardier estimates that there will be 735 new business jets in the region by 2021, and a further 1,260 bought between 2022 and 2031.

Gulfstream, a US-based manufacturer, has already enjoyed significant growth in the Middle East in the past five years and is expecting more. It had 146 aircraft in the region last year, up from about 110 in 2007. Heidi Fedak, the senior manager of social media and external communications at Gulfstream said “I expect growth in the region, especially now we have the Gulfstream G650 available for sale,” she added “The G650, which is being exhibited for the first time in the Middle East at the air expo, is the fastest business jet on the market, and can fly from Melbourne to Abu Dhabi in about 13 hours, shaving about two hours off the journey time of a larger passenger plane.”

Ten years ago, buyers would use consultants when choosing their aircraft, but today, many clients are directly involved in the purchasing process. “We are seeing a different buyer today than what we saw some time ago in the Middle East,” said Colin Steven, the vice president of sales and marketing for Europe, the Middle East and Africa at Embraer Executive Jets. “Today there is so much information out there that the guys understand range is the priority, comfort is the priority, so I want to go big and I don’t want anything small.” 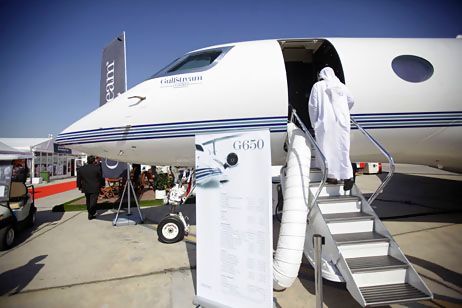 The Middle East Market for Business Jets is Increasing