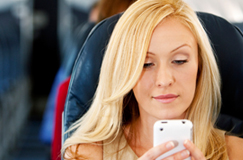 In the news again and again are the developments for inflight broadband. Some passenger groups hail it as an essential, other just see it as a rip off. One news report this week suggested that supply outweighed demand – but no commercial airline or private jet wants to be left behind the times.

This week we heard that the U.S. Federal Communications Commission (FCC) issued an order implementing Ku-band rules for the operation of satellite earth stations on aircraft enhancing competition and promote the widespread availability of Internet access to aircraft passengers – potentially starting the rise of low cost wifi on airplanes.

Providers to the aviation industry often differentiate their products by aircraft wifi for business aviation, and in flight wifi for commercial airlines.

Up until now, L-band licenses (1-2GHz) could be obtained from the FCC to offer connectivity to airborne aircraft over Mobile Satellite Services (MSS). The new rules will allow the FCC to process ESAA applications up to 50% faster and will speed the deployment of ubiquitous airborne broadband services, including Internet access.