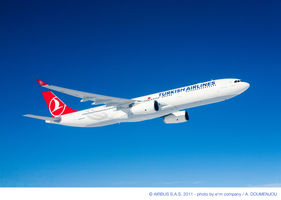 Turkish Airlines has signed a firm order for two additional A330-300 passenger aircraft to be deployed on medium and long haul routes from the Turkish Airlines hub in Istanbul. An additional three options as part of the carrier’s continued growth plans, takes their total orders to 38. With the initial order in 1984, Turkish Airlines now operate in total 104 Airbus

Dr Temel Kotil, CEO of Turkish Airlines said “As one of the fastest growing airlines, our strategy of growth needs to be fully supported by efficient, reliable and profitable aircraft” he continued “This new order for A330s reinforces our commitment to a family of aircraft which already helps us to achieve our ambitious expansion plans, in a profitable and sustainable manner”

The A330 is one of the world’s most efficient aircraft with best in class operating economics. With numerous ongoing product improvements, it still remains the most cost-efficient and capable aircraft, averaging dispatch reliability well above 99 percentThe A330 having 250 to 300 seats, includes Freighter, VIP, and Military Transport/Tanker variants, has now attracted more than 1,200 orders, with over 900 aircraft flying with close to 100 operators worldwide.

Airbus Chief Operating Officer, Customers. John Leahy said “We are very proud to win a repeat order from Turkish Airlines as it shows without doubt a strong endorsement for the A330 unique combination of unbeatable economics, versatility and fuel efficiency,”  “In response to the continuing strong demand, we’re making the A330 better and better, with new higher weight variants to offer more payload-range capability while keeping reliability at top level.”