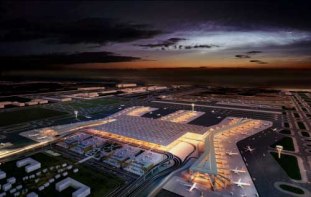 It has been announced that Yotel, the London-based hotel group, have been commissioned to build one of the largest airport hotels in the world at the almost-completed Istanbul New Airport.

The 451-roomed hotel will be located within the main airport terminal building and will have access from both air-and land-side, which will make it ideal for travellers and airline crew.

The airport operator, iGA, hopes that the new airport will ‘accelerate the growth of Turkish Airlines’, and has a focus to ‘bring an unprecedented passenger experience’ with the implementation of passenger technologies.

Kadri Samsunlu, CEO of iGA said, ‘Over the past 16 years, Turkey has visibly undergone a significant growth, development and reforms in its economy, tourism, infrastructure and standards of living and INA is a crucial part of this vision aimed at setting the bar higher and improving the quality of life for our citizens and visitors alike, l feel fortunate and privileged to be a part of this monumental project.’

Yotel operates four hotels in Europe at Gatwick Airport, London Heathrow, Amsterdam’s Schiphol Airport and at Paris’ Charles de Gaulle airport. This new development will be the largest. INA is expected to be able to handle up to 200 million passengers per year when it opens in the autumn of this year and will have three terminals and six runways.