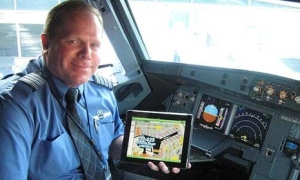 This week JetBlue announced that they are training their pilot to switch to Apple’s iPad apps for essential flight planning access.

American Airlines announced just days before that it has completed its plan for the introduction of more than 8,000 iPads fleet-wide. This all adds up to less weight, less fuel burned and huge improvements in the efficiency of the flight planning process all round.

JetBlue hope that, in addition to the electronic flight bag, the FAA will further approve apps for instrument approach and taxiway charts in the near future.  There is little doubt that, certainly for flight planning, the iPad is the way forward for the aviation industry.