Following pressure from private airlines, Bangladeshi Ministry of Civil Aviation and Tourism have removed the fee structure for aeronautical operations for private airlines.

While the non-aeronautical fees for parking and access to hangar facilities will remain, private domestic airlines will no longer pay the fees associated with takeoff and landing, it was announced at the CIRDAP auditorium last week.

The Minister for Tourism, M Faruk Khan said, “It is to save the industry and these airlines will now be able to cut down operating costs.”

The move comes as a drastic measure in a bid to save the remaining three private airlines in Bangladesh.  Over the past 17 years, six operators have folded and the future of private aviation is in jeopardy if changes to the fee structure are not implemented.

Minister Khan blames previous Governments for the decline of the industry.  Tasbirul Islam, Managing Director of United Airways, urges further cuts to be made in non-aeronautical fees, but welcomes the decision to waive aeronautical fees. 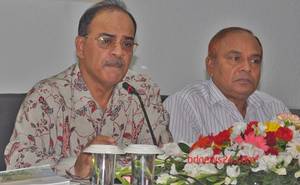