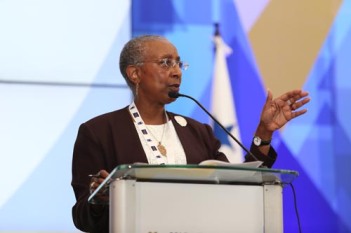 The 28th ACI Europe/World Annual General Assembly, Conference and Exhibition is approaching fast, and there are just a few weeks left before some of the airport industry’s biggest names and leaders join the leadership panel in Brussels to discuss some of the most important issues facing the aviation industry.

The leaders panel has now been finalised, and attendees can look forward to hearing keynote speakers over three full days:

The theme this year is ‘Airports as Brands and Businesses’ and the conference will be looking at the evolution of the airport into a business building a brand relationship with its customers.

The conference and exhibition will also be focussed around the ever-increasing challenge of airport capacity as passenger numbers continue to grow year-on-year. How do airports ensure that they maintain mandatory compliance, keep passengers moving, look after baggage, maintain watertight security and at the same time make sure that passengers stay happy and bottom line operational budgets stay intact?

Attendees at the conference will find out what the biggest names in the industry think about these challenges, and how the industry itself is working to meet these demands while keeping systems and processes efficient and cost-effective.

ACI World director-general, Angela Gittens said, ‘Our assembly provides a unique opportunity for industry leaders from all regions of the world to share their expertise and experience and debate and explore ways we can continue to adapt and grow. ACI is the only truly global voice for the airports industry and our assembly is the perfect venue to foster dialogue among airports as well as with stakeholders in the aviation industry as a whole.’

The exhibition promises to deliver a wealth of networking opportunities, and will showcase a wide range of airport solutions, including, but not limited to:

To find out more about the conference and exhibition, and to register for your place, please click here.

ACI Europe delivered an overview of its ‘burning issues’ last month in the annual New Year Reception in the European Parliament.

Although optimism remains high about traffic growth, and ACI Europe reaffirmed its support for more ‘Open Skies’, concerns remain in place about the potential impacts of Brexit and about airline protectionism.

Following the reception, ACI Europe’s board met with EC Task Force 50 to talk about Brexit impacts on the aviation industry across Europe. The first phase of Brexit negotiations have delivered a small sense of relief for UK and EU airports, who are glad that there appears to be some form of support of a transition period, but Dr Kerkloh remains concerned that the risk of a ‘no-deal’ scenario are still very real. He said, ‘For now, we still remain completely in the dark as to what will happen at the end of the transition. One thing is pretty clear though – the political dynamics shaping these negotiations are very much at odds with business interests.’

Dr Kerkloh added that ACI Europe has repeatedly stressed, since the beginning of the Brexit negotiation process, that there is a ‘need to keep the most liberal aviation regime between the UK and the EU – to safeguard air connectivity.  Anything more restrictive than the current Single Aviation Market will come at a cost.  There is just no winning alternative.’

ACI Europe has concerns over EU Regulation 868/2004 on unfair trading practices in European aviation. As staunch supporters of the Open Skies initiative, ACI Europe, according to Dr Kerkloh, ‘We are worried that some are trying to use the revision of Regulation 868 to advance a protectionist agenda.  Don’t get me wrong: Open Skies need to go hand in hand with fair competition and we do support the Commission proposal. But the rules must be crystal clear and specific – they should not be open to different interpretations.  Also, Regulation 868 should be triggered only when damage is demonstrated and only as a last resort – after all other applicable dispute resolution mechanisms have been exhausted.  These are essential safeguards to prevent abuses in the use of this Regulation and maintain trust with our trading partners internationally.’

Currently, the European Commission is evaluating the EU Directive on airport charges, and Dr Kerkloh unequivocally defined what needs to be at the very heart of this evaluation. He said, ‘These new market dynamics need to be at the core of the evaluation.  That means that the evaluation must resolve the contradiction in policy approaches between airport charges and State aid.  The Commission’s own State aid rules and the European Court of Justice have already acknowledged the reality of airport competition.  So, I have a very simple question: How can we be told that airports compete when it comes to looking at State Aid, but that airports suddenly no longer compete when it comes to dealing with airport charges?’